We’ve been asked quite a lot lately why we don’t make a 21-foot bridge unit that can be bolted to a single 7-foot-wide tower like you see in the diagram. That way the end user could erect these “mini-mast climbers” every 21 feet down the wall and connect them with planks. Sounds like a nifty idea – fewer towers to buy and fewer picks to move it. We studied the idea at length and concluded it did not meet our zero-collapse safety standard.

We would like to show you how we employ a bridge unit and why ours has never collapsed.

The Non-Stop bridge is 14 feet long and connects between two towers only. It cannot be attached to a single tower. It employs a fool-proof lock-on connection with NO nuts and bolts. Forklifts can land materials anywhere without threatening the stability of the scaffold. And Non-Stop winches have about twice the cranking power of any other brand so lifting the bridge when it’s loaded with materials is easy.

Though the Non-Stop Bridge is the length of two bays (14′ vs. 7′), for loading purposes, treat it as a single bay with a rated load capacity of 4,000 lbs.

That’s it. Simple, SAFE, and effective. And the Non-Stop bridge unit has never collapsed. In our opinion, this is the safest way to employ a bridge.

Now let’s look at a 21-foot bridge bolted to a single tower and worked like a “mini mast-climber.” This is where the problems begin. 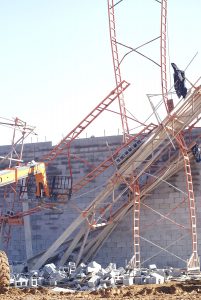 This practice is specifically forbidden by the U. S. Army Corps of Engineers: EM385 22.J.06: Bridges will not be permitted on a single tower and used as
a “mini-mast climbing scaffold”.

Another more dangerous variation of this occurs when two of these “mini mast-climbers” are erected seven feet apart and connected with planks. Customers might think they are getting “more scaffold for less money” or be able to “move 21 feet of scaffolding at a time.”

A pallet of materials landed on the planks can cause BOTH towers to collapse. That’s 49 feet of scaffolding going down all at once. 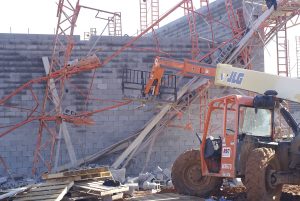 In a perfect world where our workers don’t make mistakes, this might be a workable system; however, we don’t think the average forklift driver is qualified to decide how much weight can be cantilevered on the side of a scaffold before it will tip over. In our opinion, it is better engineering practice to design a scaffold system that will support a pallet of materials anywhere you land it without fear of collapse.